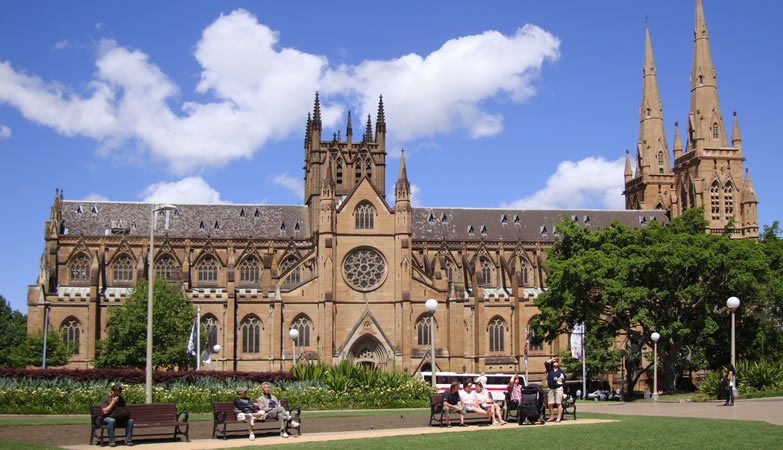 St Mary’s Cathedral stands on the site of the first Catholic Chapel in Australia. Constructed in local sandstone, the Gothic Revival style of its architecture is reminiscent of the great medieval cathedrals of Europe.

The Cathedral is dedicated to the Blessed Virgin Mary, under the title of Immaculate Mother of God, Help of Christians.

Architect William Wilkinson Wardell was commissioned by Archbishop Polding to design a new St Mary’s following the fire of 1865 which ruined the original Cathedral.

Polding was not to be disappointed by Wardell, for the building that he designed is indeed “beautiful and grand”. Constructed of dressed Sydney sandstone, St Mary’s is 107m long, the width of the Nave is 24.3 metres, ceiling height is 22.5 metres, the height of the central tower is 46.3 metres and the height of the front towers and spires soar over 74 metres.

St Mary’s is designed principally in the Geometric Decorated style of Gothic which first evolved around the 13th century. It is not a copy of a particular medieval Cathedral, but is a unique design, drawing on certain elements of its medieval forbears.

The customary east-west orientation of Cathedrals was abandoned by Wardell, probably because the fall of the land together with the great length of the building which would have made such an orientation impractical. The site necessitated the addition of a flight of more than 30 steps to the front of the building by the architects, Hennessey & Hennessey.

A visitor to St Mary’s will see many features on the outside of the building: the flying buttresses of the chancel and nave; the canopies and statues in the northern gable, the text of the Ave Maria and other invocations carved high up on the walls; the many carved saintly heads which gaze benignly down, and, way up on the towers and turrets, the more menacing figures of the gargoyles.

Moving inside the church through the main doors, the eye is drawn forward, along the length of the nave, toward the white pinnacles of the High Altar Screen, and the rich colours of the Great North Window beyond.

The columns of the main arcade are of the same warm sandstone as the exterior and interior walls, which have also been used in the vaulted ceilings of the side aisles and chapels.

As is usual in Gothic cathedrals, St Mary’s has three levels of arched openings along its length: the high arches of the main arcade, the gallery-like openings of the triforium, and the windows of the clerestory.