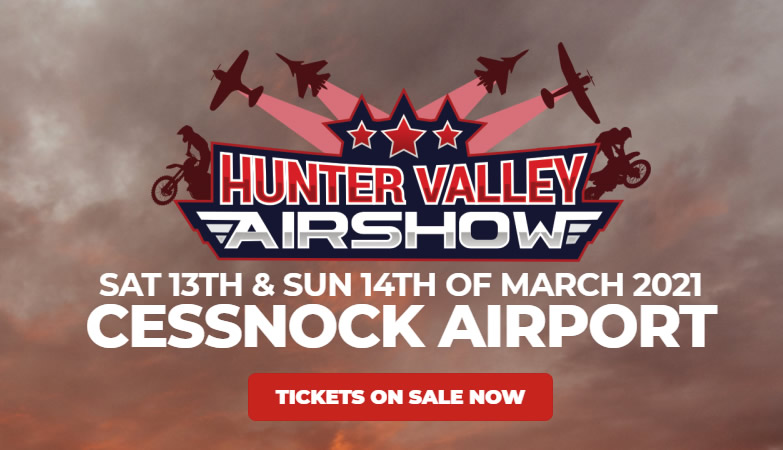 Get ready for an exhilarating weekend as Hunter Valley Airshow is back for the BIGGEST SHOW YET!

This blockbuster weekend of full-throttle family entertainment has something for everyone including hair raising aerobatics, historical warbirds, amusement rides, markets, beer & wine garden, delicious street food and so much more. Plus you can take to the sky in a helicopter or adventure flight, take part in the paper aeroplane competition, jump in the virtual cockpit of a fighter jet or just sit back and watch the non-stop airborne spectacular taking place overhead.

Each Day the Airborne Action Starts at 10:00am – 4:00pm
Below is the 2021 line-up that has been announced so far with plenty more to come.

Each day is planned to have the same line-up.

Up there with the most famous fighters of WWII, the Corsair, a.k.a The Whistling Death, earned its renown through its incredible speed, ruggedness and impressive firepower, proving to be very effective in the Pacific theatre in particular. With its inverted gull wings, there’s no mistaking this warbird as it tears through the sky at up to 640km/h – the first single engine US fighter to achieve that speed, thanks to its sleek design and Pratt & Whitney R-2800-18w 2000+hp engine.

Designed with stunning Art-Deco beauty, the Spitfire has represented the pinnacle of fighter design through the entire era of the mono-wing, piston-engined fighter. Spitfires were instrumental in maintaining aerial dominance in the European Theatre of WWII. The Mk VIII Spitfire has an all-Metal, semi-monocoque construction with the famous elliptical wing design. A total of 20,334 Spitfires were built before, during and after the war, with a total of 1652 Spitfire Mk VIII variants made.

The Hurricane stands as one of the most important fighters of WWII. Arguably eclipsed in fame and renown by the equally incredible Spitfire, the Hurricane played a crucial part in the early air conflicts of WWII. The Battle of Britain in 1940 saw just 527 Hurricanes and 321 Spitfires stand against the Luftwaffe’s force of 2,700 planes. The durability and strength of the Hurricanes were crucial in these fights, allowing it to withstand heavy enemy fire and provide cover to the Spitfires.

As the Royal Australian Air Force’s aerobatic display team, the Roulettes are famous worldwide for their high-octane displays of formation flying, aerobatics, and low-level flying that show just what incredible feats Air Force fighter pilots are capable of. The Roulettes now perform their display in the state-of-the-art Pilatus PC-21, one of the most advanced training aircraft in the world. Flying as low as 80m and at speeds of up to 685km/h and with forces up to 6G’s, the Roulettes can perform as close as 3m to each other.